How to do dependency inversion in Angular

Wanna beef the quality of your Angular application?

Then read this to learn why using dependency inversion could help you dodge a kick in the teeth.

How about we begin with a story.

Did you hear about the colors.js library? That was smashed to bits n pieces by its own creator?

In case you've never heard of it, colors.js is a library created by an open source contributor named Marak. It was a cool library that allowed you to color your console.log() statements like this. 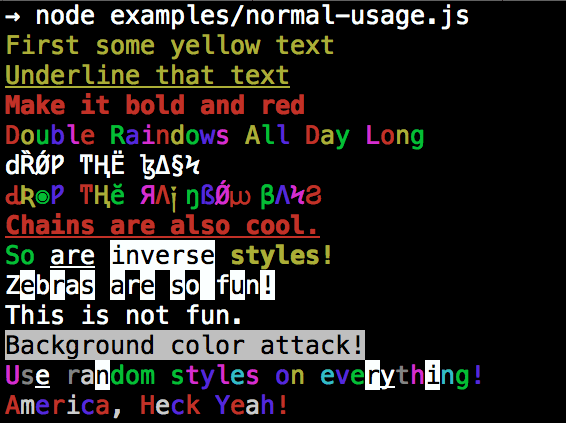 It's a genuine NPM celebrity!

I just checked the stats and it's averaged around 20 - 25 million downloads per week!

So what's the story?

In early 2022 the creator and maintainer decided to push a release that contained a well-crafted infinite loop that began at 666. This "bug" 🐞 was responsible for crashing thousands if not millions of projects and other NPM packages that depended on one small library.

And when folks discovered what he had done the open source community caught fire and with the help of NPM and Github they stole the project from Marak, the original creator.

But why did he do it? Why did burn years of hard work?

So far I haven't heard that he has yet publicly given the reason for purposefully adding an infinite loop to such a popular library. Why would you blow up your hard work anyway?

He did fling some hints here and there on the web that he was fed up with billionaire companies using his free library.

What ever the case, we'll let Marak figure out what he's going to do with his life. The point of this story is to learn why we should consider wrapping dependencies.

Because if we had an Angular app that depended on colors.js, but we had wrapped the dependency, then dodging this kind of bullet would be easy.

But if we had imported colors.js directly into our app, without wrapping this dependency, we'd have probably taken the bullet smack on.

So, how do you wrap dependencies? In a way that makes your Angular app resistant to these kinds of wild-west scenes that rear their faces on the internet?

How to wrap a dependency?

It boils down to 3 simple steps.

We'll begin with the interface. Grab the Angular CLI and create a new project for this quick demo.

I know it'd be easier to just keep reading but you'll learn the most by following along. So please, make sure you've got the Angular CLI ready.

And once that command completes we'll need to cd into the new directory.

And now, create our interface.

Here's the code for our new interface.

Now, we'll generate a service to implement our new interface.

And the code for our new service.

Last of all, we need to inject our interface along with it's implementation.

Open the app.module.ts file and edit the providers array to look like this.

And last of all, we can grab an instance of our interface and use it like this.

Do I have to wrap dependencies?

Maybe you're wondering if you have to wrap dependencies.

Is this really worth the effort?

Recently I did some consulting work for a startup called Relion. They had a slow Angular app that was causing browser freezes and needed help debugging the issue.

After doing some profiling I discovered that part of the slowness was caused by a 3rd-party library they were using to sync with Firebase.

If they hadn't wrapped the dependency I might still be working there today. But because they had followed this rule of wrapping dependencies with an interface, it was so much easier to discard the library and find a better solution. All we had to do was change some implementation details without breaking the rest of the app that referenced the interface instead of the implementation.

Is wrapping dependencies worth it? Absolutely!

But maybe you still disagree? Let me know in the comments below. 👇

P.S. - If you're a skimmer like me than here's what this article is all about.